Shellfish have been a mainstay for the Squaxin Island people for thousands of years. They remain important today for subsistence, economic and ceremonial purposes. As with salmon, the Tribe is guaranteed to harvest shellfish in the Medicine Creek Treaty. 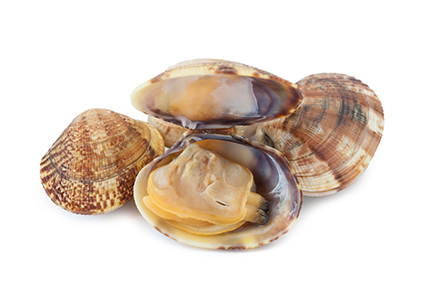 It is important to remember that these rights were not granted by the federal government, but retained by the Tribe in exchange for thousands of acres of tribal lands

On December 20, 1994 U.S. District Court Judge Edward Rafeedie reaffirmed the Tribe’s treaty right to naturally occurring shellfish. The species covered in the ruling include clams, oysters and free swimming shellfish such as crab and shrimp, as well as subtidal shellfish such as geoduck, sea urchin and sea cucumbers. Rafeedie ruled that the tribes have the right to take up to 50 percent of the harvestable shellfish on Washington beaches.

The Red Tide Hotline provides 24-hour, up-to-the-minute information on red tide conditions in the Puget Sound and the ocean beaches. Since red tide conditions may change rapidly, the toll-free hotline should be called each time you plan to gather shellfish.

What is red tide?
Red tide is not a tide, but a heavy growth of microscopic plankton which contains a powerful nerve toxin. When shellfish feed on this plankton, they retain the toxin for a time. If these shellfish are eaten, they can cause paralytic shellfish poisoning (PSP). At times this plankton can become so numerous that the water turns red. However, shellfish can become toxic even when the water does not appear red.

What are the Symtoms of PSP?
Early symptoms include tingling and numbness of lips, fingers and toes, difficulty in breathing and loss of control in the arms and legs. Death can occur when the respiratory system becomes paralyzed. There is no known antidote.

What types of shellfish are affected?
Clams, oysters, mussels and scallops can become toxic. Crab, abalone and fin fish are not affected by the toxin.

Note: Due to Adobe plugin issues with some web browsers, you may need to right click and choose “open in new window” to view the PDFs properly. 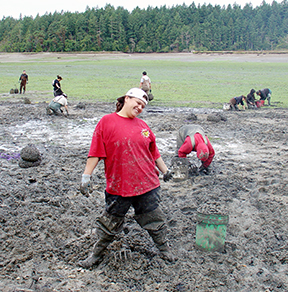 The Squaxin Island Tribe Legal Department is providing this information as a public service.  These regulations and related materials are maintained on this Web site to enhance public access to information on Tribal Laws.  This is a service that is continually under development.  The user should be aware that, while we try to keep the information timely and accurate, there will often be a delay between official publication of the materials and their appearance or modification of these pages.  The information posted is also not always intended to be the definitive authority.  The Tribal Code Book and the Tribal Resolutions remain the official source for regulatory information published by the Department.  We will make every effort to correct errors brought to our attention