Elders First
Native Americans highly value and respect the wisdom that comes with age. When eating, children and young adults serve the elders who always eat first. Never step ahead of someone in line who might be older than you, as this is considered very rude behavior.

Gift Giving in Native American Culture
Native Americans are generous and thoughtful gift-givers. The richest people are those who are willing to give away everything they own.  During potlatch ceremonies, the gift-giving may go on for several days. Gifts are usually homemade arts and crafts – made from the heart as a token of love, respect and appreciation.  Sometimes you will be approached by someone who says, “I wish to shake your hand.”  This is a sign of great respect.  Cash will be passed to you quietly.  Don’t count it until you are alone.

Canoes and Regalia
Ethnic regalia  is never called a “costume.” That would be insulting. Regalia is most often worn during sacred ceremonies, but Native Americans often wear traditional accessories as a symbol of pride in their cultural heritage.  Feathers are sacred. If a one falls, do not pick it up. Leave it where it is.

Likewise, canoes are an important part of tribal culture, and are never to be referred to as “boats.”  Doing so might cause you to be thrown in the water (in a teasing, but loving way).

Powwows and other ceremonies
Non-Natives are welcome on the floor during open dances, but some other dances are considered sacred and should be observed with proper reverence.

During the “Two-step” dance, women get to ask a man of their choice out on the floor. If he refuses, he must pay her $5.

Most powwows have a veteran dance and everyone in attendance is asked to rise and remove their hats as a sign of honor and respect. 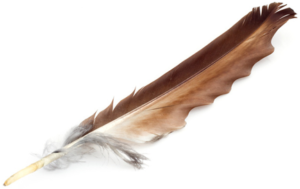 Just good sense
Do not use clichés around Native Americans such as calling men “Chief,” even in fun.  There really are tribal chiefs, so this would be considered very disrespectful.

Never refer to females as “Squaws,” which is not an Indian word referring to women, but a derogatory one given by non-Indians.

It’s best to avoid Indian jokes, too, just to be on the safe side.

Photography
Always ask permission before taking photographs and video. Consider how you would feel in their shoes.