“…extend a dyke with a driveway upon it along the east side of the channel from Capitol Park to 6th Street (Legion Way) and to acquire all the flats between the river and the proposed Capitol Avenue, this area to be mainly devoted to a salt water pond which would be kept nearly up to high water level, merely fluctuating a foot or two at ever tide so as to ensure a change of water.”

– Excerpt from January 19, 1912 letter from John Olmsted to the State Capitol Commission on the envisioned reflecting pool. 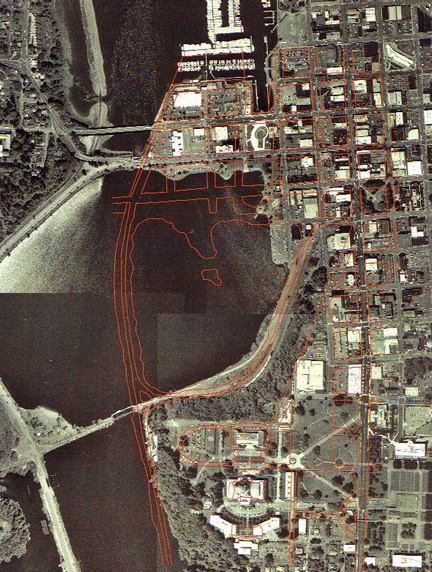 After almost two decades of work, architects Walter Wilder and Harry White and landscape architect John Olmsted finally agreed in the late 1920s on a final version of the Capitol Campus plan. The plan included a reflecting pool, which would have incorporated a long north/south running dike, separating the water immediately adjacent to the present day Heritage Park from the rest of the estuary. “While this still would have been a drastic change in the estuary’s natural habitat, it would not have destroyed it,” said Dickison. “The original plan for the Capitol Campus did not call for the creation of Capitol Lake in its present form. It did not call for the damming of the Deschutes River.”

Contrary to fulfilling the original “vision” of the Capitol Campus, the creation of Capitol Lake was an urban renewal project. During the Depression a shanty town – known as “Little Hollywood” – sprung up on the shores of the Deschutes estuary on the site of a former log yard. This shanty town survived until the 1940s when it was burned to make way for the final damming of the Deschutes River in the 1950s. When the river was blocked, it flooded the old shanty town site. “It’s a local myth that the original designers of the Capitol meant for the river to the dammed,” said Dickison. “Four decades passed from when the design of the campus was first laid out in 1911 and the damming of the Deschutes River was completed in 1951.” Also, because of opposition from the operators of the then Schmidt Brewery who were still using the Deschutes for shipping in the first half of the century, damming the river at 5th Avenue would never have been feasible.

By blocking the Deschutes River, the State of Washington created a warm, shallow reservoir with a host of environmental problems, including water quality issues and an ongoing invasion of non-native weeds. For example, Capitol Lake creates obstacles for Deschutes River salmon. “Estuaries are important places in the life cycle of salmon,” said Dickison. Migrating juvenile salmon, which in most areas can slowly acclimate themselves to saltwater, are immediately dumped into saltwater after they leave Capitol Lake. “Moving immediately from fresh to saltwater is a huge shock to their system,” said Dickison. “Maintaining Capitol Lake, rather than returning the original estuary, is choosing to limit salmon production on the Deschutes River.”

“The Squaxin people have always and continue to depend on the natural resources of our region,” said Jim Peters, Natural Resources Director for the Squaxin Island Tribe. “Every piece of habitat is important to us. The Deschutes River sustained us in the past; it will sustain us in the future.”

“The Deschutes River has the potential to be a much more ecologically rich place than it is today,” said Dickison. “Wilder and White clearly had more respect for salmon than the people that dammed the Deschutes River, creating Capitol Lake. The original designers obviously designed the original reflecting pool in the context of the natural environment.”